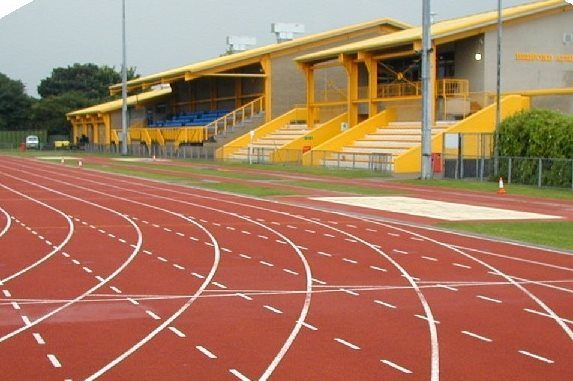 The Croydon Harriers u13 and U15 girls and boys travelled to Bedford for their opener at this level,
and they showed considerable promise finishing a safe fourth of six teams.

The U15 girls fared even better in the sprints with a maximum in the 100m thanks to Gracelyn
Kendeck 12.4 and Atarah Kenton 13.1 Gracelyn also won the 300m with an impressive 40.9 clocking
Holly Smith won an exciting U15 1500min 5.08.5 with her Brighton rival breathing down her neck.
The shot was a productive field event for Croydon with A winner Gabrielle Tcheuka almost 2m clear
at 9.81m The hard work inc aforementioned Gracelyn was second in the B event.

The sprint relay proved to be a happy hunting ground too with a a clear Croydon win in 50.1. The
team was Kelly Ajayi, Gabriella Tchekum and Gracelyn Kendeck.

The 1200m duo of Micah Salmon A 4:05.4 and all rounder Alex Giles B 4:22.7 took first and second
places. Alex also won the long and high jumps with personal bests of 4.39m and 1.43m with Ifeyani
Dav, have also won the 75m hurdles in a comfortable 14.4ids excelling to head the B strings
Kalvin Mills looked with his 6.64m shot win and the sprint relay team of Ifeani, Alex Deshane
Sharmakh and Lashawn showed their rivals clean pairs of heels with strong 55.6 victory
The club’s U13 sprint girl sprinters were 100% points gatherers.

75m A Shivelle Marshall 10.2 and 150m A 29.4 Both great races. Saray-Destiny Crosdale matched
her time to win the B 75m in fine style B 150m would have won the A event with a very crisp 20.2
mark
Another welcome Croydon maximum came in the shot with Saray 7.06m and Arabella Howard
6.36m the best two putters overall.

Several athletes displayed commendable team spirit by filling in for points in unfamiliar events, while.other youngsters were competing on Croydon colours for the first time and acquitted themselves
well. With gaps promising to be filled, the team looks set to climb the league