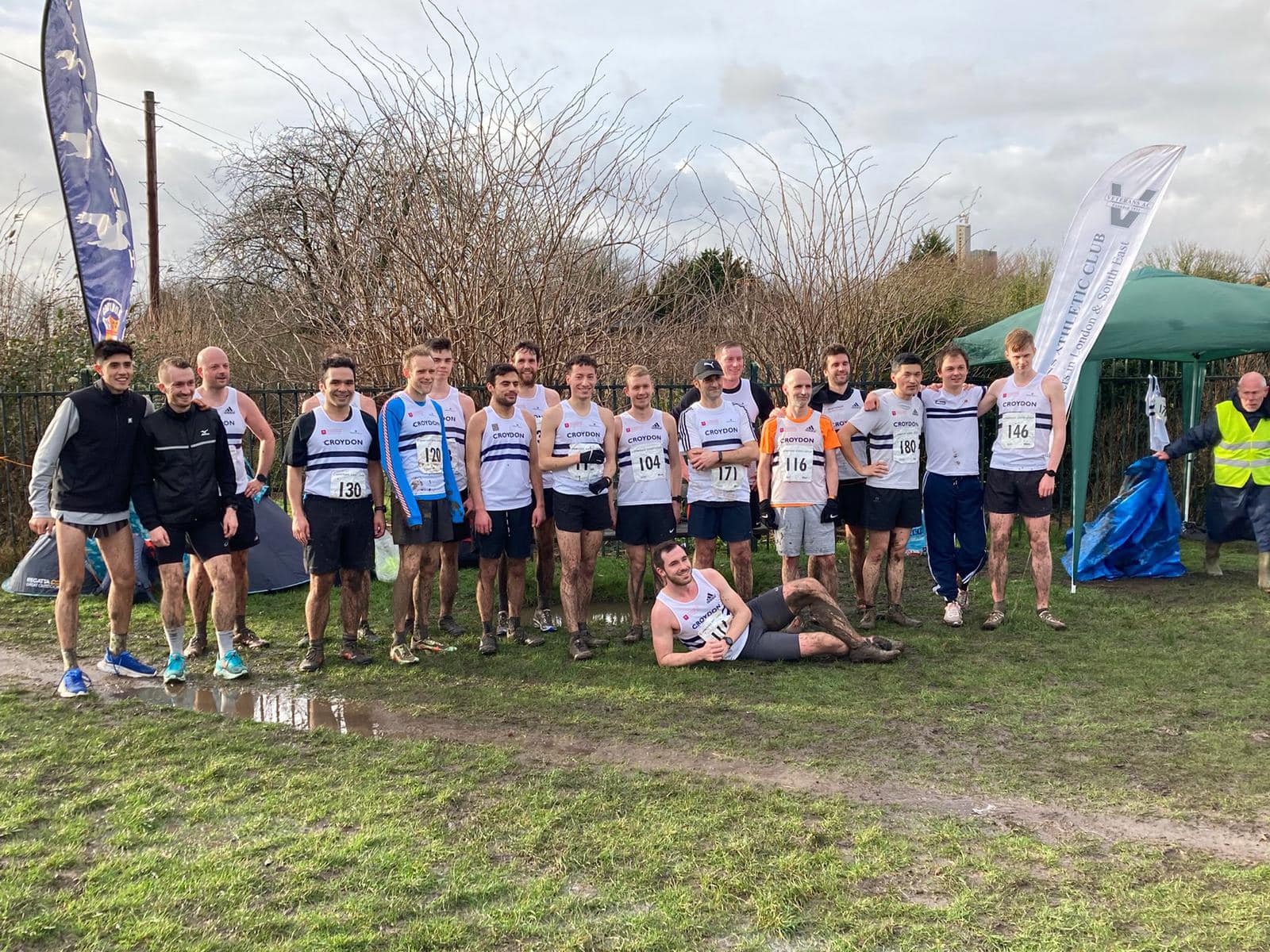 Croydon Harriers’ men’s squad secured promotion to the Surrey Cross-Country League for the first time in seven seasons, after a runners-up finish at Lloyd Park on Saturday.

Dom Nolan secured a dominant win, and his third league race victory of the season. He was backed up by James Hancock in fourth who would secure the overall league title in the process. A returning Peter Chambers was fifth in a workman-like performance, while Adam Hudson (8th) and Phil Symonds (13th) packed solidly.

The remainder of the scoring ten consisted of Pat Lucas (36th), Alex Penfold (43rd) who battled home despite injury, Omar Harhara (44th), Matt Shires (47th) and Ashley George (56th).  In the overall individual tables, Hudson, Abdul-Rahmaan Samad and Joseph O’Keefe were third, fourth and fifth in the Under 20 men’s standings. Symonds was fifth in the men’s, while James Moore finished in the same position in the M50’s. 26 Harriers finished the 8km course.

The women’s, girl’s and boy’s league races were cancelled due to storm Eunice.

At the Battersea Under the Lights 5k, James Hancock was 9th in a high quality field, crossing the line in 14 minutes and 37 seconds. Training partner Alex Penfold was 84th in 15 minutes 25 seconds.

In parkrun action, Madeleine Armstrong-Plieth was first in the women’s category in South Norwood. Leanne Moore was third at Lloyd Park and Douglas Aikman was fourth at Great Salterns.

A speech from the manager – a thank you to the men’s cross-country team and all our volunteers:

This is the speech that I should have made in the pub, but in my defence I hadn’t written one!

A massive well done to everyone who has raced this season in the Surrey Men’s League, this promotion is well deserved for all your amazing efforts.

There are too many of you to mention personally, but just picking out a few people to highlight: David, Mike, John, Peter, Alan B, Alan D, Andy P, Nigel, Maggie, Barbara, Xav, Andy P, Colin H, Paddy, and all the helpers from Striders of Croydon and Full on Tri for all their help. A smooth show, it wouldn’t have happened without you!

Colin, Norman, Keith and Andy, who arrived at 11am, set everything up, ran and then packed away. Jules and Bianca for helping to collect in the flags and everyone else who helped pack away. You are heroes many thanks.

Congrats to Dom for winning the third race of the season, incredible achievement and travelling so far to be with us, and to James Hancock for winning the overall league division! Well done you two, couldn’t happen to nicer people, roll on the Nationals.

Run of the day definitely goes to Alex whose calf sadly gave way with 1km to go. Instead of giving up he valiantly went above and beyond and ploughed on home in 43rd. I truly believe that Alex’s enthusiasm could run nuclear power stations, it’s been great to see the progress you James, Adam H and Alex D have made this season. Shout-out to Team Hancock as always!

It was particularly special to see Peter, Pat, Omar and Josh running today, and Kartik and Rob in support, who I’ve seen develop from teenagers. Thanks also to Brendan who travelled from Northern Ireland for the Dorking fixture and came 7th, and to Will Lyon Tupman who came along today from Cambridge just to support. It’s testament to the squad that we’ve built that such strong bonds exist even when members move areas many miles away.

Thanks to everyone who has stuck by us through the lockdowns and while the track was shut, to everyone new who was got involved this season, it doesn’t matter where you finish you are all a part of this team. Expect some social media treats for you in the coming weeks.

Thanks again, go Team Croydon, WE ARE GOING UP!