More medals came courtesy of Xander Collins (U15 Boys 60m hurdles) bagging silver, and newcomer Naomi Owolabi who edged teammate Kayla Bowley in the U17 Womenâ€™s 60m for bronze by three hundredths of a second.

At the SLAN Open meeting, the ever-improving Romell Glave particularly caught the eye clocking 6.78secs for the 60m. It will mean the 17 year-old will be invited to the National Trials in Sheffield next month to compete for a place on the British team for the European championships. Ayo Salako shot to the top of the rankings for the Under 13 boys 60m.

At the Surrey cross-country championships at Lloyd Park, Dom Nolan scooped the clubâ€™s first medal in the menâ€™s race in fourteen years, finishing runner-up in a high quality race.

Peter Chambers was 17th on his comeback from injury, with the rest of the scoring team comprising of Alex Penfold (67th), Patrick Lucas (69th), Mark Maginn (107th) and Glenn Barden (108th). Croydonâ€™s team were eighth overall.

Kieron Connor finished 11th in the U20 menâ€™s race and Jessica Moore matched that feat in the Under 17 womenâ€™s race.

Stevie Lawrence led the womenâ€™s challenge finishing 17th in a field of over 120 finishers. Jules Williams (106th), Miriam De Souza (119th) and Radhika Selvarajah (129th) completed the team who placed 14th. It is Croydonâ€™s best finish in this Championship in 23 years.

Croydon also enjoyed record turnouts in the Under 13 girls and Under 15 boys age groups, with them being led home by Kyra Sethna-McIntosh (20th) and Robbie Tambling (35th) respectively. 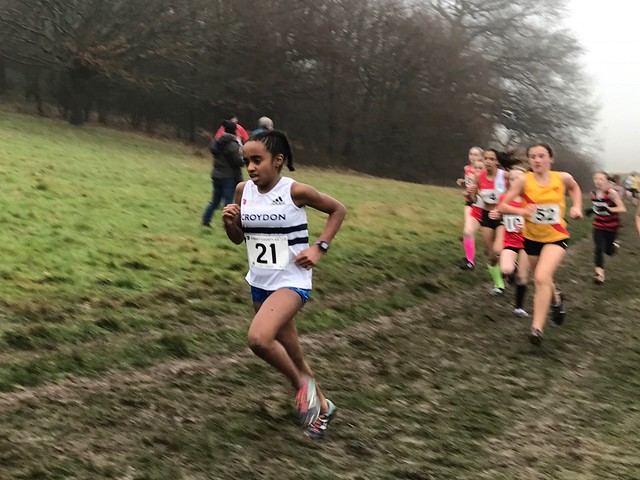