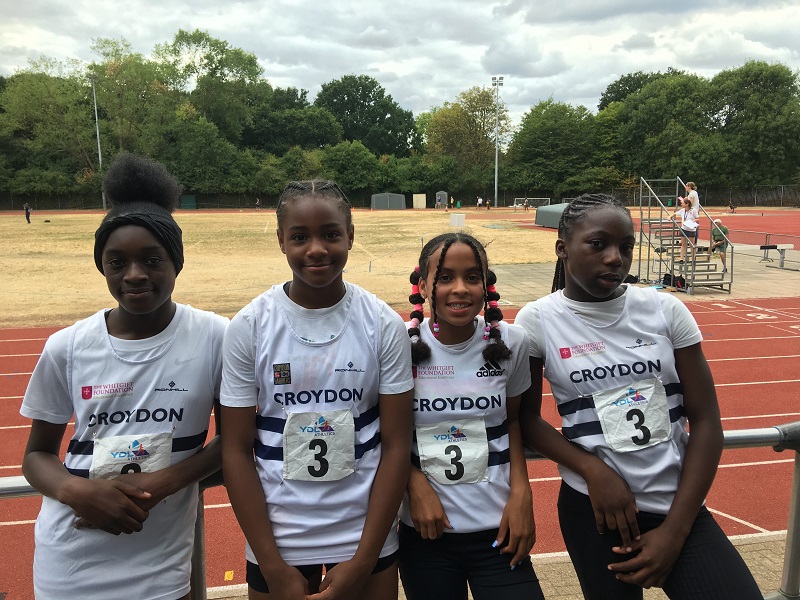 Croydon Harriers young athletes team secured a third place finish in the final 1st division fixture of the season at Tooting on Saturday, ensuring they keep their 1st division status for 2023.

Farrell Fabusiwa secured a 100m and 200m double in the Under 15 boys category, with solid support from Jayden Atta-Fynn in the B 100m to ensure maximum points. The pair then teamed with Chisom Iyke and Chezon Brown to win the 4x100m in 46.3secs, their fastest time of the season and best since 2020.

In the Under 15 girls, Gabriella Tcheukam won the shot putt in 11.64m in a new lifetime best. Also on the field Alex Giles leapt to a new best in the Under 13 boys high jump with a 1.55m effort. Giles would team with Isaiah Easy-Riley, Kalvyn Millsa and Lashawn Henry to win the 4x100m in 52.7s, a new season’s best.

In the Under 13 girls category, Shivelle Marshall and Casielle Murray would win the 75m and 150m respectively, with Sarah-Destiny Crosdale taking the spoils in the B events. Crosdale would also win the shot putt and then teamed with Murray, Marshall and Gabrielle Reid to win the 4x100m. The pick of the middle-distance events went to the Under 13 girl’s 1200m thanks to Aida Palomares-Dominguez and the debuting Ellie Thomas would gain a double win in the A and B events.

In parkrun action, Phil Symonds was first home at Richmond in 16:42 ahead of 299 other finishers. Anna Corby (Mount Edgcumbe) and Katherina Warren (Bethlem Royal Hospital) were first female finishers at their events.

Entries are now open for the Croydon 10K road race on the 23rd October 2022, with the start at Lloyd Park. Entries are available via croydonharriers.com