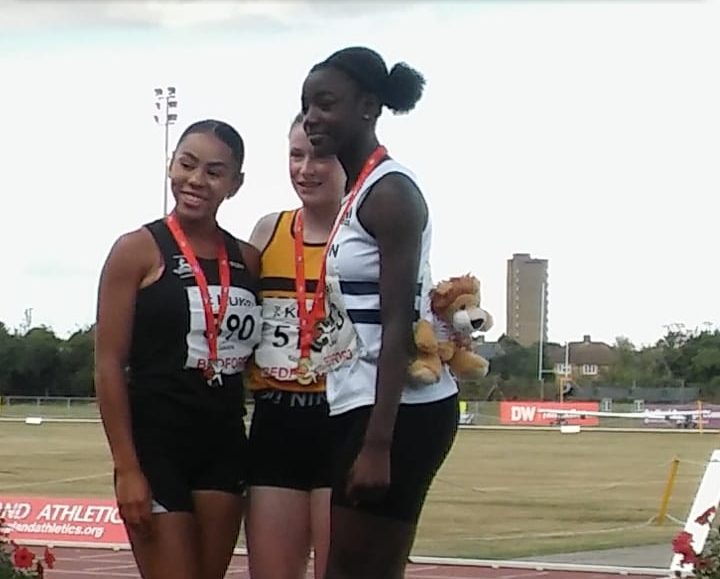 There was a brace of bronze medal for Croydon Harrier athletes at the Under 17/15 England Championships at Bedford last weekend thanks to Lia Bonsu and Toni Bryan.

It would be a first ever national medal for Lia Bonsu who took third in a wind assisted 11.07secs in the Under 15 girl’s 75m hurdles.

Toni Bryan battled her way to a bronze medal in the Under 17 women’s 200m, clocking a wind assisted 24.94secs.

Bryan had earlier reached the 100m final, where she finished 5th having run a personal best of 12.09secs in the semi-finals.

Tyvon Innis reached the final of the Under 17 men’s 100m in a new personal best of 10.90secs. Francesco Calemma ran 11.51secs in the same event. Phoebe Broadhead finished 8th in the final with a 36.27m effort in the Under 15 girls hammer.

In the Under 15 100m, Ayo Salako reached the semi-finals in 11.54secs in a new lifetime best, while carisoprodol Kyra Sethna-McIntosh (Under 17 women’s 800m) was also in action.

At the London Inter Club Challenge, Paul Ogun leapt to a season’s best of 7.63m (wind-assisted) to finish runner-up.

Lawrence Okoye continued his search for the World Championship qualifying standard by winning the men’s discus although shy of the distance required. Vaughan threw 47.17m in the Under 20 men’s event.

The girls team would finish fourth in the Lily B girls league final out of 7 competing clubs at Kingston.