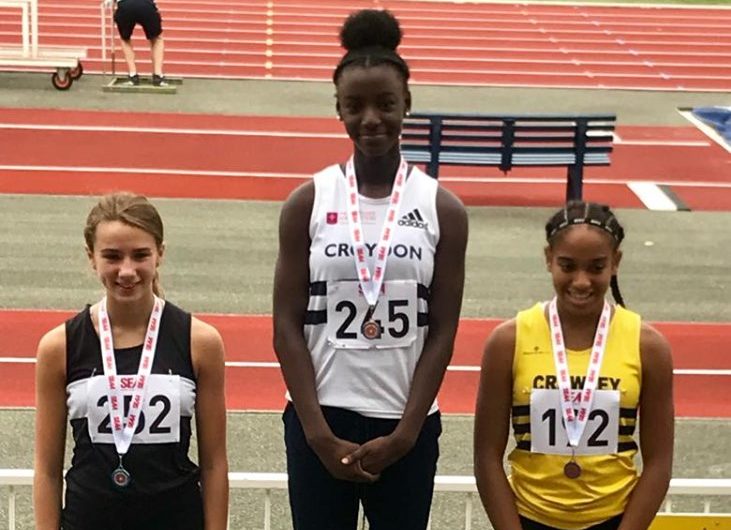 Croydon Harrier Romell Glave made his Diamond League debut in the 100m at Birmingham.

20 year-old Glave earned his invitation after a wind assisted 10.06secs run at Lee Valley four days previously. He lined up against international stars such as America’s Michael Rodgers and Yohan Blake, where he’d eventually finish 6th in 10.46secs.

At the South of England Championships at Ashford, Lia Bonsu notched a gold medal in the Under 15 girls 75m hurdles, while Toni Bryan was also triumphant in the Under 17 women’s 200m. Bryan would also added a 100m bronze to cap off a solid weekend’s work.

Kyra Sethna-McIntosh placed 5th in the  U17 women’s 800m, having also competed in the 300m hurdles.

Sheressa Miller was in action in the Under 15 girls 100m and shot putt finishing 6th in the latter.

At the season ending Southern League 2nd division fixture at Basingstoke, Croydon would finish their campaign with a fourth place finish out of the four competing clubs.

Micah Francis-Dwyer won the 100m with Jessie Agyemang matching that feat in the B race. Coach Matthew Pepper was 1st in the 200m.

There were strong seconds for Emmanuel Thomas in the pole vault (4.50m) and Reuben Vaughan in the discus (42.70m).

Jessica Moore was 2nd in the 1500m, with sister Leanne 3rd in the B event, while Anna Corby notched a season’s best in the 3000m.

There was some valiant event covering thanks to multi-eventers James Eccles, Chiamaka Davids, Morgan Lee and Jules Del Nevo who covered twenty events between them.

Thanks so much to everyone who went to Basingstoke and for all your help on the day including Mike, Andy, Jim, Ike, Radhika, Rob, Joachim, CoLinda, Zachary, Kartik, James and many many more. We cannot thank you enough!

In Parkrun action, Stevie Lawrence was first woman home at Lloyd Park while Theo and Isaac Flanagan were 2nd and 3rd in the men’s category. Brendan Murphy was third at Holy Cross College.