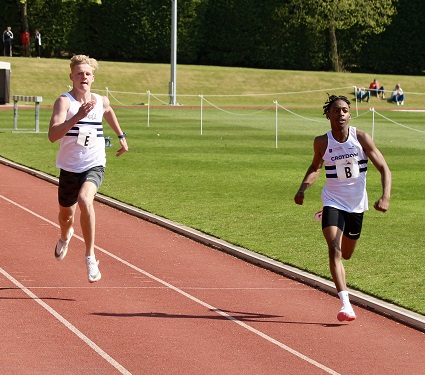 In the Under 20 women’s 100m, Rachael Largie-Poleon broke 12 seconds in her opening race of the season clocking 11.94secs. Cerys Aboagye won the shot putt thanks to a 11.56m effort, while there were maximum points and lifetime bests for Christiana Kamdom Kemegne (39.59m) and Phoebe Broadhead (38.30m) in the hammer.

Ethan Mauge enjoyed a sprint double in the U17 men’s 100m and 200m, before teaming with Ibukun Akintola, Amari-Jay Anderson and Henry Thomas to win the 4x100m relay in 43.75s.

In the Under 17 women’s category, Kacey Johnson and Tochi Davids won the 100m and 200m, with Inessa-Renae Atta-Fynn winning the B events. Lia Bonsu triumphed in the triple and long jump and then teamed with Johnson, Davids and Atta-Fynn to win the 4x100m in 49.30secs.

Massive thanks to all our volunteers and officials on the day! Including John Chambers, Peter Howes, David Harris, Maureen, Vida, Chantal, Miriam and many more! As well as to Victoria for co-ordinating!

At the Boston Marathon, Madeleine Armstrong-Plieth moved to second on the club’s all-time marathon ranking lists with a time of 3:11.33. Husband Jacob clocked 3:14:24.

Terry Lapins completed the Southampton Half Marathon in 1:40:12.3