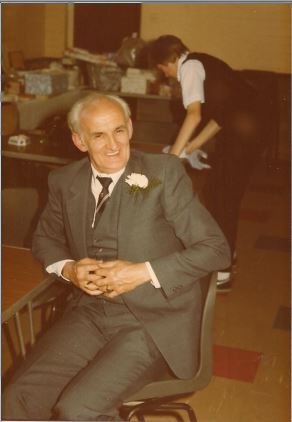 We were very sorry to learn that Austin, a Life Member, one of the club’s longest serving members died last week in Maidstone Hospital, following a period of care in a local care home. He was club captain from 1949 to 1952. He was honoured with the club Presidency from 1975 to 1977.

Austin graduated from a long career as a successful summer and winter distance runner during which time he was a key of many a Croydon Harriers team, to becoming a dedicated and efficient clerk of the course from club to county level.

He appeared as “Cover boy” on many editions of the club magazine, “The New Harrian”

He was an eternally amiable man, a keen student of the sport who constantly kept himself and the club up to date with developments. In 1960 he contributed a very fine article entitled “Tactics and Strategy in Running” for the club magazine, and the wisdom therein still holds true today.

Austin was also recognised for his proud ownership of three wheeled Robin Reliants, for regularly sporting a magnificent white sweater featuring a chest sized club badge, and for keeping tally of the laps he covered on a knitting gauge, which over many years certainly did no favours to the shoulder straps on his vests!

He set a club record of 10miles 481yds for the 1 hour run in 1960, and a demonstration of his versatility was his 2:00.6 clocking for 880yds in the same year (800m equivalent 2:05.3). Austin was also  a one time winner of the coveted Wood Roberts Cup for best achiever for a cross-country season.

We extend our sympathy to Austin’s daughters Tricia, Stella and Heather and to his wider family