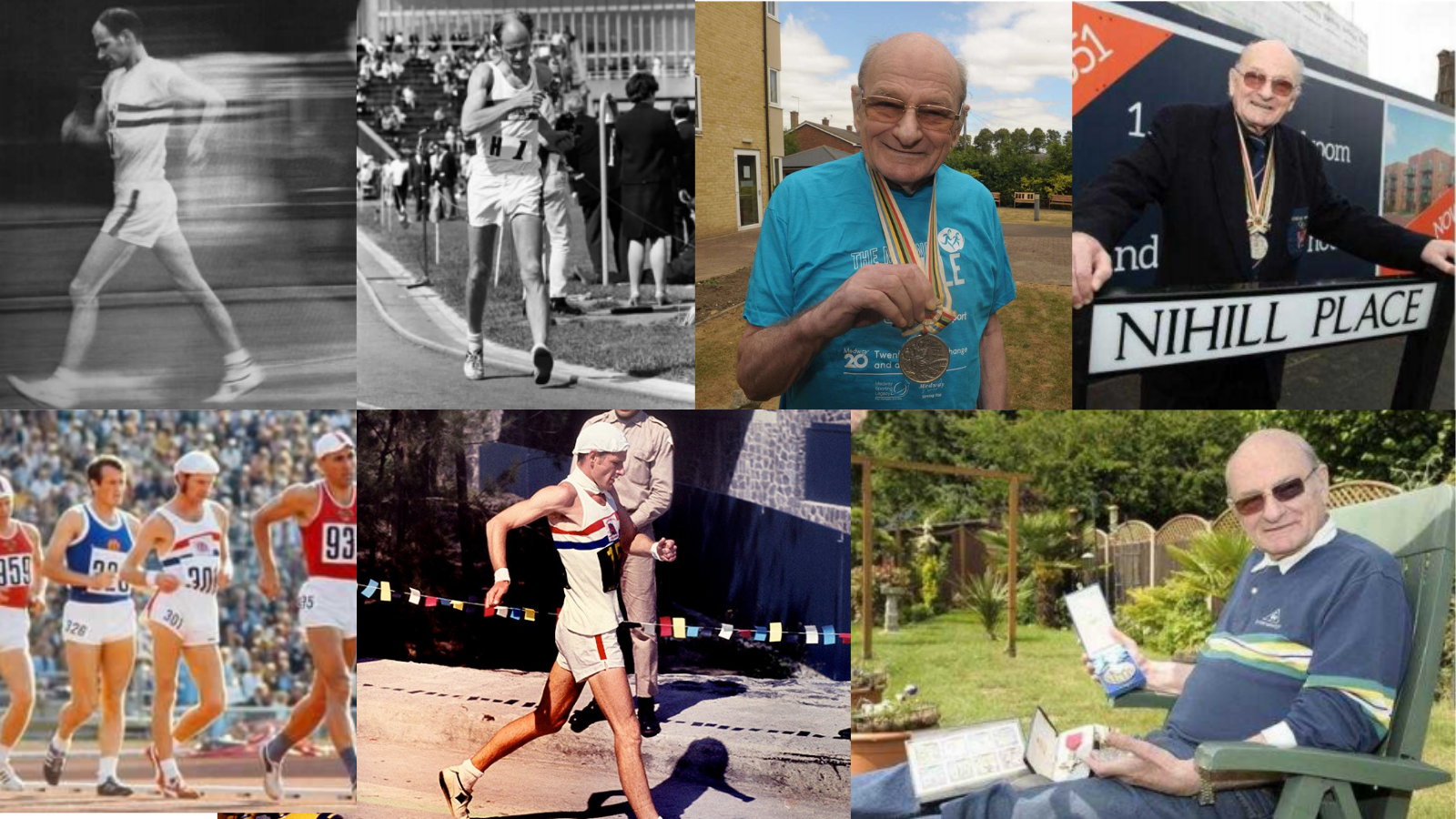 A tribute to Paul Nihill MBE

It is with great sadness that my first duty as President of Croydon Harriers is to write of the death of Paul Nihill. Olympic Silver Medallist, 50Km Walk in Tokyo 1964. He was European Champion and also Bronze Medallist amongst other outstanding achievemnets. His feat of being the first Croydonian to win an Olympic athletics medal is what he is remembered for in sport.

Many of today’s Croydon Harriers understandably don’t know much of Paul. He came from a different era of our sport. An elite athlete he wasn’t a recipient of the 100% financilal , medical or technical support available now. His ability and enthusiasm encouraged his various employers to assist with flexibale working hours and time off. No more than he deserved. He was an amateur in status only, his attitude and dedication to his sports exemplary. I say sports because despite the very strict walking technique required to walk legally, he ran and occasionally Race Walked for Croydon Harriers in Rosenheim League matches and other competitions. His Race Walking was for Surrey Walking Club, who largely trained out of Croydon Arena in the 60’s and 70’s.

Of course his achievements are so much more but these were in a Croydon Harriers vest.

I joined the club in 1965, just after Paul’s Olympic Silver in Tokyo 1964. He was at the track and I was in awe of an Olympian. A lovely, shy but approachable man who left his amiability in the changing room. He was focused and dedicated to his fitness and technique. He walked faster than many of us could run. Race walking was in the ascendance in the 60’s and 70’s, we all felt part of the same sport, but Paul showed us the difference in what was needed to reach the top. I recall going home after training and enthusing to my parents that I’d talked to an Olympic medallist.

I am proud to say I raced against Paul over Road and Country. He was so competitive, when he  beat me he was  determined, but interested after about how it went. When I beat him, I kept quiet but knew  I’d been lucky to race an Olympian.

I recall the stories of worry about Paul and his dodgy kneecap. He benefited from that knee operation. Running and Boxing, his first loves caused a lot of pain but extraordinarily Walking was easier. Not pain free but possible. That’s how misfortune can land you in the lap of the God’s. It’s funny too how the sporting nation knew about details like that in those days. It all added to Paul’s aura.

Paul was as I have alluded to, an unassuming man. He had time for everyone and enthused about their sporting achievement no matter standard. He was interested in giving the young some of the opportunities he didn’t benefit from and was instrumental in the founding a club for young people. Based in Addiscombe, PHAB ( Physically Handicapped and Able Bodied) Youth Club was ahead of it’s time and improved and changed the lives of so many young people in Croydon.

Paul’s status help him open many doors for other people. He didn’t ask for himself but his life achieved much for others.